Recent Wisconsin research has indicated that applying N to winter wheat at green-up was generally more profitable than applications at Zadoks growth stage 30 (GS30, hollow stem – just prior to first node, approximately Feekes 5.5). See past article. Some grower’s took advantage of the March weather and applied N, anticipating wheat to break dormancy in early April. Instead, we had several precipitation events, some as rain and others as snow (10 to 30 inches), along with extended period of time with temperatures significantly below average.  Growers are now wondering, what does this mean for N loss?

The short answer is that N losses were probably low. The longer answer requires us to think about a few things. First, the temperatures were cool, no downright cold for April. Thus, we might expect lower urease activity, ammonia volatilization losses, and denitrification losses. Second, in most cases rainfall preceded the snow. This means that urea likely had time to dissolve and move into the soil. However, there may be cases where the ground was frozen and rainfall caused the dissolved urea to run off the field before it could move into the soil. Unfortunately, research data on N loss in runoff from precipitation in March/April  in our climate is lacking. Some work with late fall applications of urea in Maryland demonstrated that loss of N in runoff was about 5% or less for the 4 weeks after application of urea in a rainfall simulation study. Third, depending on soil moisture conditions, N may have moved deeper into the soil profile and may be accessible to the crop as it’s root system grows.

Unfortunately, we don’t have a simple and accurate way to assess winter wheat N needs mid-season. We are currently evaluating crop sensing technology, but that is still a few years away.  Past research in Wisconsin has demonstrated that winter wheat N needs in early spring could be assessed by measuring soil nitrate concentration in the top two feet of soil at green-up and crop N uptake at GS30, but was determined to be logistically infeasible and likely not cost effective.

The maximum return to N (MRTN) suggested N rates at various N:wheat price ratios in Table 1 can be compared to help growers decide if additional N fertilizer would be profitable. For example, if  corn was the previous crop, 75 lb N/a was applied in March, and as much as 20% of the N was lost, that would mean 60 lb N/a would still remain in the soil. A 60 lb N/a rate is within the range of N rates that produce profitability near the MRTN for all N prices that are realistic this year. 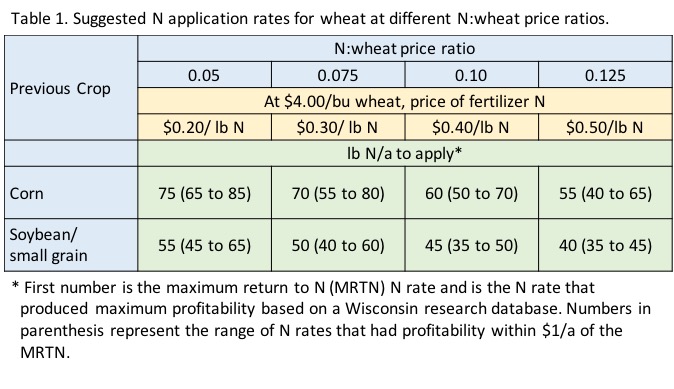 This article was posted in Nitrogen, Wheat.