No research has been conducted on the nutritional needs of hemp grown in Wisconsin in 75 years. In order to develop nutrient application guidelines for hemp, available peer reviewed literature as well as conference abstracts/proceedings/posters, research station reports, and extension bulletins from the United States, Canada, and Europe were reviewed and evaluated for their applicability to Wisconsin soils and climate.

Hemp can be grown on soils that are productive for corn. Poorly drained or poorly structured soils are not ideal because it may be difficult to establish a stand. Sandy soils may require irrigation to maximize yield (Purdue Univ.).

None of the research reviewed evaluated the effect of soil pH on yield. Because hemp is a non-leguminous oilseed, assume that the minimum soil pH for good growth is 6.0, similar to flax.

Phosphorus and K fertilizer application should be based on soil test results. Application rates are provided in Table 1. Research in Manitoba demonstrates that relatively small quantities of K are removed in the seed or with field retted fiber, but more than 185 lb K2O/a is taken up by the crop (Heard et al., 2007). 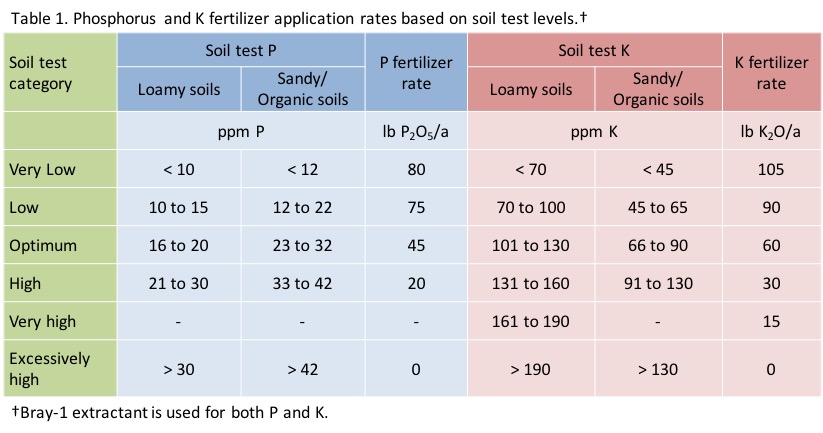 Hemp is sensitive to fertilizer placed with the seed. If starter fertilizer is used, be sure to place fertilizer at least 2 inches to the side and 2 inches below the seed. Nitrogen fertilizer timing and placement studies have not been conducted. Research in Manitoba demonstrates that N uptake is relatively low until late June then increases substantially through the end of July (Heard et al., 2007).

In Saskatchewan, Vera et al. (2010) did not find any biomass or seed yield response to S applications on fields where canola had been deficient in S in previous years. The authors suggest that hemp may have either a low S need or is efficient at taking up S from the soil. Sulfur applications to hemp grown in Wisconsin may not be profitable. Only consider applying S if growing hemp on a field with a past history of S deficiency. Fields with a recent history of manure application are less likely to be deficient in S. If needed, 10 to 15 lb S/a should be adequate.

Growers should reduce fertilizer application rates to adequately account for manure applications or a previous forage legume crop. At this time, it is unknown if there is a N credit rotation benefit to growing hemp following soybean versus corn.

Thanks to Laura Good for her assistance with the literature review.

This article was posted in Uncategorized.