Maintaining soil fertility is important not only for profitable crop production, but also soil health. In a long-term P and K fertility trial, we can see that there is much greater residue cover in plots that have received adequate potash applications over time compared to where no K was applied. Application of P had minimal to no effect on residue cover. The effect of P and K application on residue cover is not surprising because it mimics yield response to applied nutrients. Even though soil test P levels are low in the unfertilized plots, there has been minimal yield increases to applied P in both corn and soybean over the years. In contrast, we have observed very large yield increases (30 bu/a soybean, 200 bu/a corn) with K application. 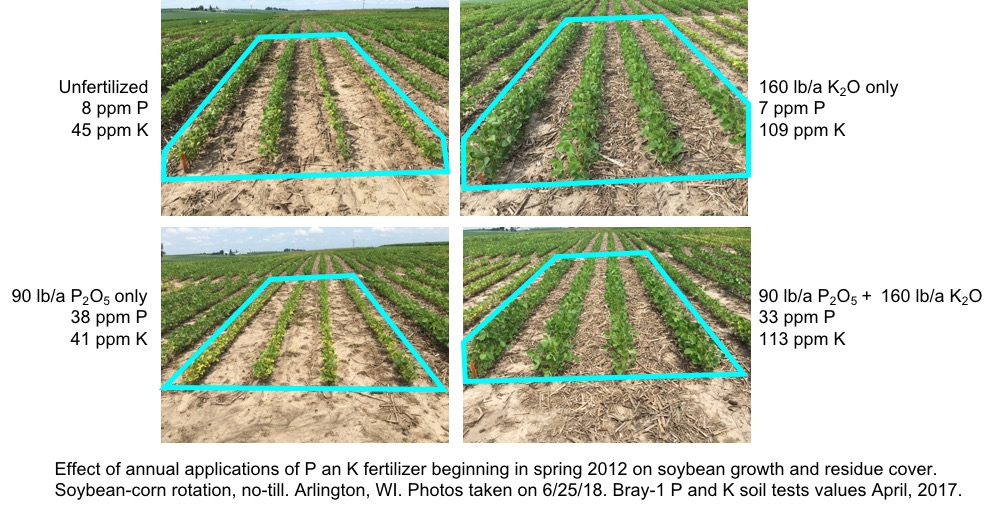 Residue cover protects the soil surface from crusting which subsequently reduces the potential for soil erosion. In the photos above, plots with poor K fertility have little residue cover, even though the previous crop was corn for grain. Surface crusting is apparent in these plots. Plots with adequate K fertility have more residue cover, protecting the soil particles from detaching and forming surface crusts. Surface crusting reduces water infiltration and can result in sheet erosion. Crusts can also reduce infiltration of surface applied liquid manure. Maintaining soil fertility and keeping soil in the field are key components of healthy soils.

For more information about the yield responses to P and K, watch this video.